Biblical Meaning Of Flooding Water In A Dream 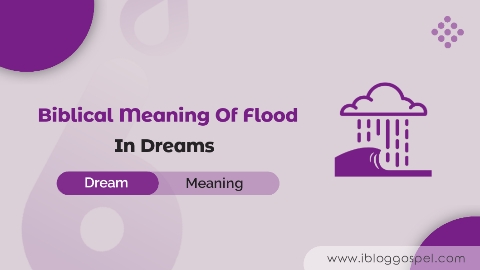 Signs of what is happening in our lives come to us through various means. One of those means are dreams. God has designed it in such a way that even those who do not know Him are also able to see dreams, so that they don't walk blindly into danger. Today, we will learn the biblical meaning of flooding water in a dream.
One of the attention-grabbing dreams that many have reportedly seen is a dream about flooding. Dreams about flooding neither come frequently nor to everyone, but when this dream shows up, it's always necessary the dreamer pays attention and takes swift action in order to curb the effects of the dream.

Isaiah 59:19 KJV
So shall they fear the name of the LORD from the west, and his glory from the rising of the sun. When the enemy shall come in like a flood, the Spirit of the LORD shall lift up a standard against him.

Since different people see diverse kinds of dreams about flood, we will touch on some of the following in this dream interpretation:
One serious mistake that many who see flood in dreams often make is ignoring the dream and going about their business. But God never said we should treat our dreams that way. A dream about flooding can have dreadful effects on the dreamer's waking life if appropriate actions are not taken in time.

Seeing flood in the dream is rarely a good omen. It also rarely means that an actual flooding will happen around the dreamer in their waking life. The dream meaning of flood always signifies a coming great danger or destruction.

Matthew 24:39 ESV
For in the days before the flood, people were eating and drinking, marrying and giving in marriage, up to the day Noah entered the ark. And they were oblivious, until the flood came and swept them all away. So will it be at the coming of the Son of Man.

In the Bible, an instruction from God was given to Noah, to warn the inhabitants of the earth of a coming flood. But people were too carefree to listen, until the flood came and destroyed everything and everyone who turned deaf ears. We should be wiser and not handle flood dreams the same way.
Flooding dreams are always warning dreams—revealing a pending physical or spiritual danger that is coming for the dreamer. It is totally unwise to ignore such dreams thinking nothing will happen.

Genesis 6:17 ESV
For behold, I will bring a flood of waters upon the earth to destroy all flesh in which is the breath of life under heaven. Everything that is on the earth shall die.

In the Bible, when God sent the flood to destroy the earth, it was due to man's rebellion. But the flood that was sent by God was actually a cleansing mechanism—to cleanse the world of sin and evil, and create anew.
Flooding dreams rarely come from God, but if they do, they are always for the good of the dreamer. God doesn't exist to destroy. It is the enemy whose assignment is to kill, steal and destroy (John 10:10).
Most flooding dreams happen to be God's way of revealing to the dreamer that the enemy is planning to harm them in one way or the other.
To be more specific, flooding in dreams could symbolize the following:

1. A New Beginning That Must Be Preceded By A Storm

When God is about to usher a person into a new season of their life, sometimes, a temporary storm in their life might be unavoidable.
Bringing them into the new season might require that certain things around them be shaken and stripped off from them. Even some relationships and connections may get affected in the process.
Remember that in the book of Genesis (after the flood), the new manifested. There was a fresh start. That wouldn't have been possible without the past storm that did way with the old.

Isaiah 43:19 NIV
See, I am doing a new thing! Now it springs up; do you not perceive it? I am making a way in the wilderness and streams in the wasteland.

To most Christians, the Lord will show them a flooding dream, just in a bid to notify them of a coming storm that will be used to usher them into their new season. It is then expected of the dreamer to prepare and be ready, so that it no longer takes them by surprise when the storm begins to manifest.
Remember that Noah and his family were not taken out of the flood, but were protected by God and safe throughout the days the flood lasted. There is no need to fear if God is the One unsettling certain things in our life. He always does that with good intentions and a bigger goal in view.
Also understand that, if a flooding dream is from God, the dreamer will not get caught and destroyed in the flood. God did not destroy Noah in the flood, but he was able to come out to be a part of the new thing God created.

A flooding dream can also be a medium through which God reveals a coming, serious spiritual attack that the enemy has plotted against the dreamer.
The enemy always wishes that he could take us by surprise and send something that could sweep us off our feet—leaving us with no time to respond. But God is wiser and always steps ahead of the works of darkness. He will not let evil befall us without our notice (Psalm 91:10).
Isaiah 59:19 makes us understand that it is the enemy who rises like a flood against God's people, but a good news follows afterwards: The Spirit of God will raise a standard against him!
In most cases, a flooding dream shows up when the enemy has concluded plans to use the best weapons in his arsenal or assign the strongest of his demons against a Christian. The intent is always to bring about a sudden and utter destruction to everything around the dreamer or possibly terminate their life.
When the flood comes, it doesn't only bring destruction but also sweeps things away with it. People have lost in a day, what they worked to acquire for years, due to the manifestations of a flooding dream. That is why one must treat these dreams seriously and counter-attack the plots of darkness if they happen to dream about a flood!
In the book of Revelation, the bible speaks of a serpent (Satan the devil), from whose mouth proceeded water like a flood. This flood was sent against a woman (The Church):

Revelation 12:15 KJV
And the serpent cast out of his mouth water as a flood after the woman, that he might cause her to be carried away of the flood.

This is to further reveal to you that most flooding dreams reveal a coming life-threatening spiritual attack that the enemy intends to launch against the dreamer. But rest assured, if God be for you, nothing can stand against you!

3. A Fast Approaching Season Of Trouble

There is also the need to point out that, not all storms that come our way are ordained by God as a means of bringing about a new beginning. Some storms are artificially induced by the enemy, just as part of his efforts to fulfil his mandate of causing destruction.

Jeremiah 46:8 KJV
Egypt riseth up like a flood, and his waters are moved like the rivers; and he saith, I will go up, and will cover the earth; I will destroy the city and the inhabitants thereof.

The Israelites (as the people of God) in the land of Egypt, were in the midst of what we can call a flood that was caused by Pharaoh. In fact, the king of Egypt himself was the flood that troubled the Israelites.
The case isn't different today. From time to time, the enemy will plot a new evil against a child of God. If the enemy attacks directly to no avail, he always devices a plan to get a child of God in trouble—in their workplace, in church and in any way possible.

Psalm 91:15 NIV
He will call on me, and I will answer him; I will be with him in trouble, I will deliver him and honor him.

A flooding dream will sometimes symbolize a season of trouble induced by the enemy against the dreamer. But rest assured, our God delivers from trouble. He will deliver you as well if you pray!

Dream About Escaping A Flood

From all that has been revealed so far, you can see that a dream about escaping a flood is a powerful deliverance dream!

Psalms 74:15 KJV
Thou didst cleave the fountain and the flood: thou driedst up mighty rivers.

If you saw a flooding dream but you were able to escape the flood, that is God's mighty helping hand pulling you out of the storm; out of trouble and out of the evil that the enemy plotted against you. Rejoice!

Psalm 34:19 NIV
The righteous person may have many troubles, but the LORD delivers him from them all.

A dream of water flooding a house can reveal a home or family-bound trouble coming for the dreamer. But that's not all.

Matthew 12:43-44 ESV
When the unclean spirit has gone out of a person, it passes through waterless places seeking rest, but finds none. Then it says, ‘I will return to my house from which I came.’ And when it comes, it finds the house empty, swept, and put in order.

In the Bible, we see Jesus using the symbol of a house to refer to a man. A dream about water flooding a house can as well symbolize inner turmoil; emotional trauma, worry, fear and anxiety plaguing the life of an individual.

1 Peter 5:7 NIV
Cast all your anxiety on him because he cares for you.

If you feel that your life is out of control due to certain things going on around you, as a result, you probably lack inner peace. A house flooding dream may show up just to affirm that. But see it as the Lord calling you to cast all your cares on Him and enter into His peace.

Prayer Against Flood In The Dream

Beloved, I trust that from this article you understand the biblical meaning of flooding water in a dream.
Be reminded that God will always foil the plots of darkness against your life when you pray.
If you saw a dream about flooding that I haven't directly mentioned the meaning here, feel free to message me privately.
If this dream interpretation spoke to you, go ahead and share this article with someone else.
God bless you.