Biblical Meaning Of Coffin In A Dream

Having noticed that many are in need of accurate biblical meaning of coffin in a dream, I've put together this dream interpretation for that purpose. 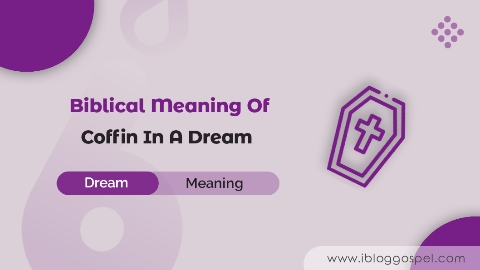 People see all manner of dreams each time they go to bed, but one of the strangest dreams reportedly seen by many happens to be a dream of coffin and funeral. If you woke up from a dream where you saw a coffin, or saw yourself carrying a coffin with other people, read carefully to understand the meaning of your dream.
I understand that seeing a coffin in a dream can be a really scary and confusing experience. From such dreams, many often wake up terrified and perplexed concerning what it could possibly mean.
If you're one of those who have been searching for the biblical meaning of coffin in a dream, I believe you're in the right spot for the interpretation of your dream.
If you stumbled on this dream interpretation article after waking up out of a dream of coffin, let's trust the Holy Spirit to not only unveil the meaning of your dream, but also provide solution against such dreams.

Psalm 68:20 ESV
Our God is a God of salvation, and to God, the Lord, belong deliverances from death.

In our dream interpretation about coffins, we will touch on some of the following:
I believe that everyone who wakes up from a dream of seeing a coffin already has a bad impression about such dream. And of a truth, coffin dreams are rarely a good omen.
One thing we must know is that dreams about coffins are never a good omen. Most times these dreams reveal to us a very urgent need to pray against the plots of the enemy to terminate someone's life around us.

The ability to dream dreams is a powerful gift that God has bestowed upon man. Without this ability, the enemy would plot evil against us in secret and go on to execute the same unnoticed. The Holy Spirit makes the ability to see dreams even more interesting—as He reveals to us through dreams, both what God is doing and what the kingdom of darkness is manipulating against us.
Seeing a coffin in a dream is not something anyone should treat with levity. Such dreams are not casual or ordinary dreams that should be ignored, with the mindset that nothing will happen. Whenever a coffin dream shows up, it is often because there is an ongoing and “almost executed” evil plot that is meant to bring death upon the dreamer or someone close to them.
To be more specific, dreams about coffin often reveal the following:
Death should only be seen as a natural occurrence (and a part of life cycle) when it is not untimely. It is true that every living thing eventually exhausts their life span and dies. But when human life is terminated prematurely (through any evil means), we cannot say that such followed the natural course of life cycle established by God.

John 10:10 ESV
The thief comes only to steal and kill and destroy. I came that they may have life and have it abundantly.

The Bible is clear on the three-pronged assignment of the enemy: that he came to steal, to kill and to destroy! Satan makes it his point of duty to undauntingly launch attacks (that could possibly terminate life) against innocent people. This is often done in his attempt to prevent the manifestations of divine destinies.
While God satisfies us with long life and good heath (Psalm 91:16), the enemy always strives to afflict people with sicknesses, in his efforts to take their life prematurely. Untimely death is not part God's plan for anyone.
But understand that, seeing a coffin in a dream does not always point to the possible demise of someone close to us. Sometimes, these dreams could reveal what the enemy is plotting against the dreamer—the very one who saw the dream. So if you happen to see such a dream but you're unsure of who the target is, it is safe to pray for your loved ones and also for yourself.

Romans 8:35 ESV
Who shall separate us from the love of Christ? Shall tribulation, or distress, or persecution, or famine, or nakedness, or danger, or sword?

As Christians, we must always remember that nothing is powerful enough to snatch us out of God's hands. Because our Lord Jesus Christ defeated death on the cross more than 2000 years ago, we are safe from the menace of this Satanic assignment. So long we remain in Jesus Christ, our safety against the wiles of the devil will always be guaranteed!

How then should Christians respond whenever they see a coffin in their dream? Not with fear, but by prayer and faith in the assurance that their life is hidden and safe in Christ (Colossians 3:3).
Let me also quickly point out that, it is very easy for the enemy to terminate the life of someone that has not been submitted to God through salvation. If you're not yet a Christian and you keep seeing coffins and funeral in your dreams, the best thing you can do in order to counter the effects of such dreams is to submit your life to Jesus Christ. If this sounds like you, then go ahead and pray this Salvation Prayer.

Dream Of Coffin And Funeral

A dream of coffin and funeral often reveals that there is an impending calamity—likely in form of loss of life—which could happen suddenly if appropriate measures are not taken in time.
There are people who repeatedly see themselves in a coffin in their dreams. Some occasionally see their own funerals but wouldn't take any action. No one should be that careless with their life.
The most unwise thing anyone would do is to ignore such a dream whenever they see it. The message communicated in those dreams are always straight to the point: death is approaching!
For instance, there's a woman whose one of her children dreamt they took her in a coffin inside a bus and were heading for the graveyard. In waking life this woman was already terribly sick, and she eventually lost her life because this dream wasn't taken seriously.
It is unfortunate that some people see their own death but wouldn't take action until it actually happens. The Lord doesn't expect us to be that naive. No doubt about the fact that, when the works of darkness are revealed to us, they are reserved for destruction. But we must go on to endorse their actual destruction by praying!
Our Lord Jesus Christ will never fail to do His best to keep us safe, just as He promised in His Word:

John 18:9 NKJV
That the saying might be fulfilled which He spoke, “Of those whom You gave Me I have lost none.”

The Son of God manifested that He may destroy the works of the devil (1 John 3:8). But we also must do our part to stay safe. It is very easy for the enemy to terminate the life of a prayerless person. If you haven't been that prayerful in the past, I believe seeing a dream of coffin and funeral should be just enough trigger to push anyone into praying better.

Dreaming Of A Family Member In A Coffin

Seeing a family member in a coffin is not one of the dreams with a hidden meaning. This dream is clear that sudden and untimely death is coming for a family member or any of your loved ones and relatives. The best you can do for them is to intercede in order to prevent the execution of this evil plot.

Prayer Against Coffin In Dreams

Final Words On The Meaning Of Coffin In A Dream

The enemy wishes he could make anyone he hates to disappear from the earth at will, but God is more powerful.
Great destinies have been cut short through untimely death, because people took dreams of coffin lightly. We must stay alert and always be swift to take action against the works of the enemy whenever they are revealed to us through dreams.
Except the Holy Spirit gives us a personal intuition that the coffin in our dreams points to a coming departure of an aged person, we must stay ready to counter-attack and reverse the effects of such dreams by the power of God.
If you were blessed reading our dream interpretation on the biblical meaning of coffin in a dream, go ahead and share this article with someone else.
God bless you!