Biblical Meaning Of Wolves In Dreams 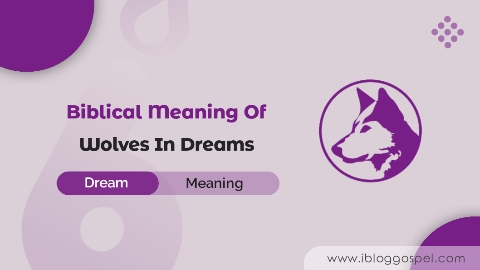 I may not know how many of you reading this have once seen a wolf in your dream. But there is the possibility that if you found this article through Google, you must have been searching for the biblical meaning of wolves in dreams. Let's trust the Holy Spirit to enable us decipher the meaning of your dream.
From my observation and from the many dream interpretation requests that I have received, I can tell that not very many people see wolves in their dreams. But for those of you who have been dreaming about wolves—and have been searching its accurate biblical meaning, I believe you're in the right place to learn the meaning of your dream.

Jeremiah 5:6 NLT
So now a lion from the forest will attack them; a wolf from the desert will pounce on them. A leopard will lurk near their towns, tearing apart any who dare to venture out. For their rebellion is great, and their sins are many.

The very first thing I want to point out here is that, wolf dreams are dreams with very serious spiritual meanings. Whoever sees this dream must treat it seriously, then go on to ascertain the meaning and the solution to it. If you're one of those who frequently see wolves chasing and attacking you in your dream, do not treat it as normalcy, because there's nothing normal about it.
In this article, we will talk about some of the following:
Wolves are noted for strength, freedom and the ability to fiercely protect what is theirs. Wolves are intelligent and social species of canine, but we shouldn't be tempted to interpret our dream about wolves based on these characteristics. These are just but the physical characteristics of the wolf. When it comes to the spiritual, the symbol of the wolf implies something completely different.
The Bible describes wolves as ferocious, vicious and ravenous (Matthew 7:15). This alone should have a lot to tell us. Wolves aren't just intelligent but also savagely cruel and violent!

Genesis 49:27 NIV
Benjamin is a ravenous wolf; in the morning he devours the prey, in the evening he divides the plunder.

Another outstanding fact about wolves is that they are predators. And then, there is always the victim which the predator goes after—that is, the prey. We must not fail to take this into consideration when trying to understand the meaning of our wolf dreams.

Biblical Significance Of A Wolf

When you go through the holy scriptures, you will notice that the Bible does not portray wolves in a good light. Take for instance, what the below Bible verse says below about wolves:

John 10:12 NIV
The hired hand is not the shepherd and does not own the sheep. So when he sees the wolf coming, he abandons the sheep and runs away. Then the wolf attacks the flock and scatters it.

Speaking of the biblical significance of a wolf, we see throughout scriptures that the symbol of the wolf is used to describe the following:

The Bible portrays corrupt and evil leaders as ravenous wolves.

Zephaniah 3:3 NLT
Its leaders are like roaring lions hunting for their victims. Its judges are like ravenous wolves at evening time, who by dawn have left no trace of their prey.

Ezekiel 22:27 ESV
Her princes in her midst are like wolves tearing the prey, shedding blood, destroying lives to get dishonest gain.

This is because they apply dishonest measures in their ruling and dealings with their subordinates. They pervert justice, while elevating and practising injustice.

Although false ministers of the Gospel pretend to work for God, they are actually working against Him. Instead of building, they labour to tear down what has already been built—for their own selfish gains (Philippians 3:19).

Matthew 7:15 ESV
Beware of false prophets, who come to you in sheep’s clothing but inwardly are ravenous wolves.

Instead of performing the role of a shepherd, false prophets prey on the sheep.

3. Wicked People Who Take Pleasure In Harming Others

Our Lord Jesus Christ admonished us to dwell with wisdom with people around us. He said that “He sends us out as sheep in the midst of wolves.”

Matthew 10:16 ESV
Behold, I am sending you out as sheep in the midst of wolves, so be wise as serpents and innocent as doves.

It is clear that when Jesus made this statement, He wasn't referring to demons, but fellow humans. Jesus classed the wicked as wolves, because they prey on the innocent and gullible.

Meaning Of Wolves In A Dream

I believe at this point, we have already gotten a sneak peek into the meaning of wolves in a dream.
Most dreams about wolves are often not so good dreams. Wolves are predators; they aggressively go after their prey to feast on them. Wolves are known for their desire to tear down. Almost every other animal that comes their way is seen as a target for attack and destruction.
Whenever a person dreams about a wolf chasing or attacking them, they must understand that they are under a very serious spiritual attack from the enemy. In most cases, this isn't the enemy coming after them by himself, but using his human agents against the dreamer.

Luke 10:3 BSB
Go; behold, I send you forth as lambs in the midst of wolves.

In the scriptures, the symbol of a lamb is often used to portray the children of God, while the wolf is often the enemy of the children of God. The responsibilities of the Lord and the pastors He calls also include safeguarding the sheep from the wolves—especially wolves in sheep's clothing.
The moment a Christian sees a wolf in their dream, no matter how friendly that wolf may be, the Christian must understand that there is an evil person; an agent of darkness with an evil assignment against them. This individual must be prayerful, because this gentle-looking wolf might be laying in wait for the right opportunity to strike!
There are people who see themselves walking with a pack of wolves in their dreams. This often means that there are certain people they are not supposed to have in their circles. There are people who pretend to be our friends, yet they're just waiting for the right opportunity to harm us.
Seeing a wolf in a dream, walking with a pack of wolves or coming under attack by wolves in the dream, is not a good omen. Wolf dreams are rarely a good omen and shouldn't be allowed to continue.

Spiritual Meaning Of Wolves In Dreams

Wolves represent wickedness. They wrought wickedness and wreak havoc. These are the very characteristics of the wicked, which we are warned about in the Word:

Acts 20:29-30 ESV
I know that after my departure fierce wolves will come in among you, not sparing the flock; and from among your own selves will arise men speaking twisted things, to draw away the disciples after them.

Concerning the spiritual meaning of wolves in dreams, a dream about a wolf can symbolize the following:

Black wolves in dreams are often agents of darkness manifested for who they truly are. It is either they see no need to masquerade as an angel of light, or God just wants the dreamer to know who and how their enemy truly is.

People have seen dreams where they were chased and attacked by a black wolf or pack of wolves. In most cases, the wolf in the dream is actually a person; a warlock manifested with fury to launch violent spiritual attacks against the dreamer.

Turning Into A Wolf Dream Meaning

I have heard that it is possible for some people to shape-shift into snakes, owls, wolves etc, and go on adventures in their dreams. Please, understand that such a manifestations is not of God. Being able to shape-shift into an animal and travel in dreams is evidence that the soul of the dreamer is not fully consecrated and submitted to God, and the Holy Spirit is not in charge of their life. Anything can happen to such a person. The enemy is always out and hunting for such souls, because he can easily use them for his evil errands.
If you always see yourself turning into a wolf in your dream, the first step you can take to curb this is to truly get saved. Kindly pray this salvation prayer. Then go ahead and pray to receive the Holy Spirit and be filled with the Spirit of God.

Dreaming Of Wolves Attacking Others

If you see a pack of wolves attacking others in your dream, this is often a sign that those people are under intense and very severe spiritual attacks from the enemy.

Luke 22:31-32 NIV
Simon, Simon, Satan has asked to sift all of you as wheat. But I have prayed for you, Simon, that your faith may not fail. And when you have turned back, strengthen your brothers.

Use the same approach the Lord used on Simon Peter. When you wake up, pray for them! If you couldn't rescue them in the dream, the best you can do is to intercede for them on waking up.
If you knew the people who were under attack in the dream, mention their names and pray for them. Otherwise, you can still say a prayer, coming against the plot of the enemy to destroy the lives of the innocent.

Killing A Wolf In A Dream

If you were chased by a wolf in your dream, or you were being attacked by a wolf, and you were able to kill it; then there is nothing to worry about that here. You were victorious, thank God for your victory!
The Lord said in Luke 10:19 that He has given us power to trample upon serpents and scorpions and all the powers of the enemy. A true Christian should be able to experience victory, even in their dreams.
As a Christian, it is an error to get attacked and defeated by a wolf in your dream. Running away from the wolf is still not victory either. In such a scenario, you should be worried that you were not victorious during a spiritual confrontation. But if you were able to kill the wolf which attacked you in your dream, you were able to harness the authority and power you have in Christ to obtain victory over your enemy.

Prayer Against Wolf Attacks In Dreams

Final Words On Biblical Meaning Of Wolves In Dreams

We know that wolves are intelligent and smart, but we must also not forget that even the devil is cunning and shrewd. No matter how nice a wolf may appear to be in a dream, understand that it is still looking for the right opportunity to carry out its evil assignment.
Colours of wolves in a dream don't determine which is a good or bad wolves. In the spiritual realm, things are really not the way they appear. Pray against all wolf dreams, do not allow them to persist. Ask God to reveal to you people you're not suppose to have in your life, so that you can disconnect from them and be safe. You cannot be close to everyone.
Beloved, if you were blessed reading the biblical meaning of wolves in dreams, go on and share this article with your friends and family.
Remain blessed.