Lust Of The Eyes, How Can A Christian Overcome It?

It is true that many are struggling with lust. The Bible teaches us how to overcome lust of the eyes. Let's see how in this article. God bless you. 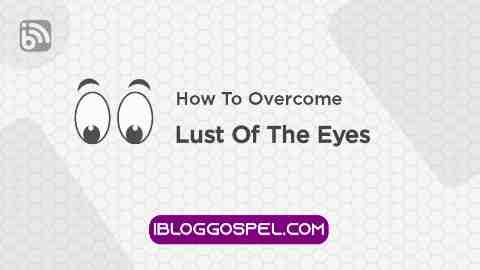 Lusting happens to be one of the major challenges that every Christian encounters in their walk with God. Sometimes, dealing with lust of the eyes can be a real pain in the neck.
Before a person gets saved, everything is normal and acceptable to them. But after we get saved and along the line; on the course of our walk with God [just like Apostle Paul], we realise that “all things are lawful but not all things are helpful” (1 Corinthians 6:12).
The moment we realise that certain things we once held on to are no longer helpful... that moment you come to the understanding that a certain way you once lived will not help you make good progress in your walk with God... that's where the real challenge of being a genuine Christian kicks in.

Whenever I stumble on statements in the Bible like, “Elijah was a man subject to like passions as we are,” I'm often reminded that nothing is powerful enough to stop a Christian from attaining “the uncommon dimension” in their walk with God.
People like Elijah, Elisha, Moses, Daniel, Apostle Paul, etc were all humans like us. They had emotions also. They were faced with the same struggles every Christian has today. They dealt with lust on a daily basis. You can recall that Paul once said something like, “I die daily” (1 Corinthians 15:31). These men also underwent the struggle of bringing their flesh under subjection to the Holy Spirit. And you know the interesting part of it? They succeeded in doing so and became mighty and powerful vessels in the hand of God!
I understand that sometimes, it might seem like certain things are impossible to deal with. But the fact that something is difficult does not always mean it's impossible. I've observed that some Christians often relent in their striving against sin whenever they hit a wall. Hitting a wall while confronting an addiction does not mean that's how far you can go in your fight against it. By the grace of God, it is still possible to break through that wall and lay hold of your victory against the lust of the eyes.

The Bible lets us know that lust is not of God, but of this present world. And we're also told in the same scriptures that whoever loves the world automatically becomes the enemy of God (James 4:4). Simply put, any Christian who enjoys lusting instead of making efforts to overcome it, is trying to make theirself an enemy of God. I'm sure no genuine Christian wants to do such.
So here comes the question: Can a Christian overcome lust? The answer is definitely yes! I believe this is a very important topic in the Body of Christ today. So we will take it step by step. Follow up diligently so that you don't miss any point.

Lust Of The Eyes Meaning

Lust Of The Eyes Examples

A perfect example of the manifestion of the lust of the eyes is seen in what transpired between Eve and the serpent in the garden of Eden.

Genesis 3:6 KJV
And when the woman saw that the tree was good for food, and that it was pleasant to the eyes, and a tree to be desired to make one wise, she took of the fruit thereof, and did eat, and gave also unto her husband with her; and he did eat.

As you can see in the scripture above, the beginning of the fall of humanity started with the lust of the eyes. And again, this wasn't a man looking at a woman lustfully. This was a woman looking at the tree of knowledge of good and evil and daydreaming how she could become wise if she ate just one fruit from it!
You see, lust starts from a desire to do something against the instruction and will of God. Lust of the eyes comes when man sets his eyes on something and begins coveting that thing with his imagination. Did I just mention the word “covet”? Yes, lust is one of the worst forms of covetousness.

As you can see in Exodus 20:17 above, it isn't just another man's wife or another woman's husband that can be coveted.
It's important to point out that the Bible encourages us to covert spiritual gifts (1 Corinthians 12:31), because it is for the common good of the Church. Besides, it's a spiritual gift! Not a material possession.
Whatever material thing someone else has that causes us to want to have that same thing (simply because someone else has it), then we can say that we are lusting. By wanting to obtain anything that way, people have ended up pursuing and stealing what belongs to their neighbour. It all starts from lusting with the eyes!
Some Christians may go like, “Okay, but I'm not lusting at any man/woman.” But wait... are you envious of any material thing another person has and wants to grab it out of their hand or have same by every possible means? If your answer is yes, then there's still a struggle with lust to be overcome.

How To Overcome Lust Biblically

One major key to overcoming every form of lust is contentment. Most men cheat not because they don't have a wife. They're already married but they're insatiable. They imagine a situation where they can have any woman that appeals to their eyes. You can call it greed!
Some people already have an expensive and functional car, but the moment they see someone they know with a new car, they automatically want to get that same brand of car (added to the ones they already have). If it's not that exact same brand, they can't be happy. That's the result of lust and lack of contentment.
The moment some see their friends with a particular phone, they instantly begin to hate their own phone. The next thing is that, they want to sell their phone and buy that same phone their friend is using. Lust of the eyes has so many children!

James 1:13-15 KJV
Let no man say when he is tempted, I am tempted of God: for God cannot be tempted with evil, neither tempteth he any man: [14] But every man is tempted, when he is drawn away of his own lust, and enticed. [15] Then when lust hath conceived, it bringeth forth sin: and sin, when it is finished, bringeth forth death.

Eve was tempted to reach out with her hand to pluck and eat from the tree of knowledge of good and evil, after she must had spent a considerable time staring at the tree and nursing the lust in her heart until it matured. By so doing, her guard was let down and she reached a point of no return—where she had no other option but to take and eat from the tree. That is what the Bible calls “being drawn by one's own lust and enticed” (paraphrased).
It is true that the internet strives to feed everyone with lustful images daily. But it is one thing to see a lustful sight online and move away from it, then it is another thing to see the same and stop by to feed on it. When the eyes are intentionally fed with lust, it will always result to something more worse!
Overcoming lust will require self-discipline. We can learn that from Paul in 1 Corinthians 9:27.

1 Corinthians 9:27 (NIV)
I discipline my body like an athlete, training it to do what it should. Otherwise, I fear that after preaching to others I myself might be disqualified.

Overcoming the lust of the eyes has to start with an actual willingness to overcome it. No one can overcome the sin they hold so dear.

Psalm 119:37 KJV
Turn away mine eyes from beholding vanity; and quicken thou me in thy way.

Like the Psalmist, the above scripture should also become one of our prayer points.
Furthermore, any Christian who is zealous about overcoming lust of eyes must be filled with the Holy Spirit (see the reason in Zechariah 4:6). It is also important to get one's mind renewed — as part and parcel of contending with lust.

How To Overcome Lust Bible Verses

In your fight against lust, feel free to go ahead and use the following Bible verses:
Job 31:1 KJV
I made a covenant with mine eyes; why then should I think upon a maid?
Matthew 5:27-29 KJV
Ye have heard that it was said by them of old time, Thou shalt not commit adultery: [28] But I say unto you, That whosoever looketh on a woman to lust after her hath committed adultery with her already in his heart. [29] And if thy right eye offend thee, pluck it out, and cast it from thee: for it is profitable for thee that one of thy members should perish, and not that thy whole body should be cast into hell.
Luke 9:23 KJV
And he said to them all, If any man will come after me, let him deny himself, and take up his cross daily, and follow me.
Romans 6:1-2 KJV
What shall we say then? Shall we continue in sin, that grace may abound? [2] God forbid. How shall we, that are dead to sin, live any longer therein?
Romans 6:12-14 KJV
Let not sin therefore reign in your mortal body, that ye should obey it in the lusts thereof. [13] Neither yield ye your members as instruments of unrighteousness unto sin: but yield yourselves unto God, as those that are alive from the dead, and your members as instruments of righteousness unto God. [14] For sin shall not have dominion over you: for ye are not under the law, but under grace.
1 Corinthians 6:18-19 KJV
Flee fornication. Every sin that a man doeth is without the body; but he that committeth fornication sinneth against his own body. [19] What? know ye not that your body is the temple of the Holy Ghost which is in you, which ye have of God, and ye are not your own?
2 Corinthians 7:1 KJV
Having therefore these promises, dearly beloved, let us cleanse ourselves from all filthiness of the flesh and spirit, perfecting holiness in the fear of God.

Prayer Against Lust Of The Eyes

Final Words On Overcoming Lust Of The Eyes

Beloved, now you see that lust of the eyes can be overcome. It may not happen overnight; it may not happen the moment you start fighting it. Always remember what this scripture says:

Hebrews 12:4 (NIV)
In your struggle against sin, you have not yet resisted to the point of shedding your blood.

The difficulty that comes with resisting sin isn't to the point of shedding our blood. It's not as difficult as some may make it sound. With Christ in you, living out the consecrated life becomes very easy. We only need to yield and let Him do the work through His Holy Spirit in us.
If you were blessed reading this message, do not hesitate to share with as many as you can.
God bless you!