How To Stop Eating In The Dream Permanently

Those who understand the implications of eating in dreams do not want it to continue. Here is a guide on how to stop eating in the dream completely. 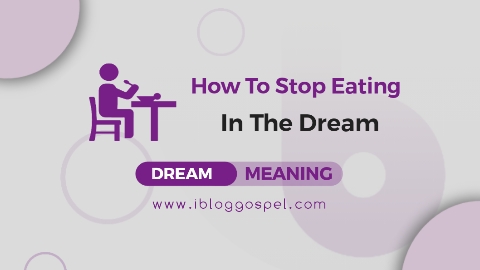 Why People Eat In The Dream

Not all forms of eating in the dream is evil, but understand that on very rare occasions do eating in the dream mean something good.
The major sources of dreams about eating are God, the human mind and the Devil. I'll explain how these three operate.

1. Eating In The Dream As A Prophetic Occurrence

More than a couple of times in scriptures, we have seen where prophets were given scrolls to eat, either by God or His Angels. Apparently, this is always very prophetic, and most of these occurrences happened during an open vision, and not actually in a dream.
A good example is what transpired between John the Beloved and the Angel of God in the book of Revelation:

Revelation 10:10 NLT
So I took the small scroll from the hand of the angel, and I ate it! It was sweet in my mouth, but when I swallowed it, it turned sour in my stomach.

Another occurrence where a scroll was given by God to be eaten by someone is what we see in Ezekiel 3:3.

Ezekiel 3:3 NIV
Then he said to me, “Son of man, eat this scroll I am giving you and fill your stomach with it.” So I ate it, and it tasted as sweet as honey in my mouth.

One thing I've noticed here is that, God didn't go about giving random people things to eat in their dream. He was very intentional about the kind of people who were given scrolls to eat; they were Prophets and the scrolls were prophecies given to them to prophesy to the people. It had to be given to them in that manner.
But even at that, there are not many occasions in the Bible showing us that God gave people things to eat in their dreams or visions.
In the book of Acts, we also see a story where Peter fell in a trance and saw animals of different species (clean and unclean), then God instructed him to “rise, kill and eat” (Acts 10:13).
This revelation was very prophetic and symbolic; it was instrumental to the salvation of the Gentiles. God used it to teach Peter that salvation was for everyone, and for that reason, Peter should reach out with the Gospel to both Jews and Gentiles.
Apart from these, we haven't read from other disciples that they were given things to eat in their dreams by God. If there is anyone frequently eating food and other things in dreams, such is definitely not from God.
Are you a prophet? If yes, then in your walk with God, if He happens to give you a scroll to eat in your dream, it may happen just once. That isn't something that should occur frequently. If you're not a prophet, you cannot blame your eating dreams on God, because He is not responsible for them.

2. The Mind Also Influences Eating In The Dream

The Bible makes us understand that, whatever people think about during the day is likely to manifest as a dream when they sleep. That is just one reason why we are instructed to take thoughts captive (2 Corinthians 10:5).

Ecclesiastes 5:3 CEV
If you keep thinking about something, you will dream about it. If you talk too much, you will say the wrong thing.

The mind is a complex machanism, but it's in us and not outside of our control. Those who have a passive mind often allow and entertain every thought, but that shouldn't be the same with Christians.
Those who allow their minds to operate in passivity could spend their whole day thinking about eating their favorite meal, and on going to bed, a dream of them eating that food pops up.
That is because they gave power to that thought by constantly dwelling on it. The thought of eating their favorite food was brooded upon and made potent enough to manifest as a dream. The mind is a powerful thing, so use it wisely.
If you know that you're not going to fulfil your craving for a particular meal during the day, then do not crave it at all. If you do, know that it is likely going to manifest in your sleep as a eating dream.

3. Eating In The Dream As An Attack From The Enemy

Most eating dreams that people see are neither from God or from the mind. They are often carefully crafted spiritual attacks from the enemy.
We don't want to list all what the enemy always intends to achieve against people with such dreams, but we know that the enemy means us no good. The Bible says that he came to steal, kill and destroy (John 10:10). One of the major means by which the enemy kills, steals and destroys is through dreams.
As the Bible puts it, that “while men slept, the enemy came and sowed tares among the wheat and went his way” (Matthew 13:25), every eating dream orchestrated by the enemy is a form of evil implant in the life of the dreamer. This is often both physically and spiritually harmful.
For better understanding, read our article on the Biblical Meaning Of Eating In The Dream.

How To Stop Eating In The Dream

Frequent and disturbing eating dreams are never from God nor the mind, but from the enemy. It is always obvious that whoever or whatever is behind such dreams has an ulterior motive.
This is further evident in the fact that most eating dreams are forced, and sometimes people are manipulated into eating what they don't want to eat in their dream.
The steps below will help you in your efforts to stop eating in the dream permanently.
Step 1:- First of all, understand that eating in the dream is a deadly spiritual attack. There are people who see such dreams as fun. If you are one of them, then you have to start by changing your mindset towards such dreams. The enemy is working hard to destroy you through eating in the dream, and that is not funny.
Step 2:- Start praying ruggedly against eating in the dream. Pray these Prayers Against Eating In Dreams. When you start praying against this dream, it may begin to show up even more frequently. This is because the enemy wants to keep you in that bondage while you are trying to break free from it. Each time you destroy his works against you by praying, he will come back to renew it, and this may manifest as more eating dreams. This is meant to discourage you and make it seem like your prayers are not working. Do not give up, but pray even more and the enemy will be defeated.
Step 3:- There are people who eat in dreams to the extent they are unable to resist such dreams anymore. Whenever the enemy wants to feed them his poison in the dream, he does so successful without any resistance from the dreamer. This is not supposed to be. Know that the enemy will keep trying, even after you are delivered from these dreams. The ability to resist and reject food in the dream is a powerful thing, and this can only happen when the dreamer is very spiritual. In other words, when you are spiritually weak, it becomes difficult to reject and resist such dreams when you sleep. So work on becoming more spiritual. Grow spiritually in Christ. Upgrade your spiritual life.
Step 4:- Whenever you find yourself eating in the dream, wake up and start praying ruggedly to cancel the effects of such dreams. Ask the Angels of God to arrest whatever or whoever is behind that dream, and prevent such dreams from showing up again. One mistake people often make is waking up after eating in the dream and going about their day without praying. If you do that, it won't be long before the effects of the dream begin to manifest. So always make sure you pray just as I've said.
Step 5:- Never miss praying before going to bed. You can use this Bedtime Protection Prayer. I know that some days' activities can leave one so exhausted, but make a decision to always pray effectively before sleeping, knowing that the enermy may be plotting to attack in your weakest state.
Step 6:- The need to be filled with the Holy Spirit cannot be overemphasised. No one can have too much of the Holy Spirit. You should desire to have as much and strive for more daily. Most of the spiritual attacks that get to people would have been repelled by the presence of the Holy Spirit in and around them, if they were full of Him.
Step 7:- Don't just depend on your ability to resist food in your dreams. While you pray each night before you sleep, always remember to ask for God's protection. Ask the Holy Spirit to take charge of your dream life and control the kind of dreams you are allowed to see.
Step 8:- Fast and pray consistently. While on fasting, always remember to declare broken the cycle of persistent dreams about eating. Keep repeating this step daily until such dreams cease completely.
Step 9:- Ask the Holy Spirit to always enable you to resist getting fed in your dreams. This will increase your spiritual resistance against such dreams.
Step 10:- Stay consecrated and on fire for God. Do the things that will get you closer to God daily. Be consistent and purposeful about your spiritual growth. Remember, flies don't perch on a hot surface (because they know they're going to get burnt). Demons don't have their field day in the lives of those who are on fire for God.

Final Words On How To Stop Eating In The Dream

Now that you've gotten this scriptural guide on how to stop eating in the dream permanently, God depends on you to do your part by making the best use of what you've learned here, in order to bring about your deliverance.
If you benefitted from reading this article, go on and share it with someone else who might be facing the same problem.
God bless you.