Spiritual Meaning Of Receiving A Letter In The Dream

There are those who have seen letters given to them in dreams. Read this article on the spiritual meaning of receiving a letter in the dream. 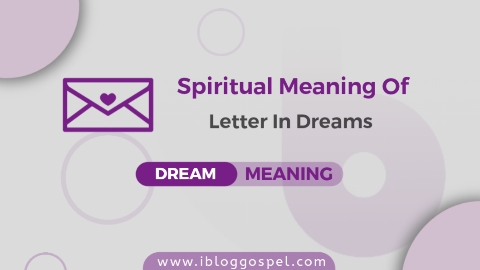 Receiving a letter in a dream is one of the rarerest dreams out there that often leaves the dreamer perplexed. Considering the fact that not many people do see dreams of receiving letters, I noticed that there is also little to no biblical information online concerning this dream.
iBloggospel exists to bring you biblical and spiritual interpretation for your dreams. By God's enablemnent, we will delve into the spiritual meaning of receiving a letter in a dream today, from a biblical and Christian standpoint.
As we progress with this dream interpretation, expect to learn the following:
If you are one of those who have been opportuned to see yourself receiving and reading letters in the dream, I'll advise you to treat such dreams very seriously.
I'll also advise that you get a dream journal (if you don't have one already) and write down your very important dreams. There are days you will be thankful that you have a dream journal handy.

Dreams of receiving or reading letters are always very spiritual (and sometimes, prophetic) dreams. These dreams can as well either be a good or bad omen.
Some dreams of receiving letters always manifest as warning dreams (either from God or the kingdom of darkness).
A letter dream rarely shows up as a casual dream from the human mind. This is to say, letter dreams are often intentionally sent to the dreamer from a source. Since life is spiritual, I don't expect this to sound strange to anyone.
A dream about receiving a letter that tends to come from God could as well be accompanied by a thrilling feeling. Meanwhile, when a dream of receiving letter comes from the enemy, it is expected to be accompanied by a feeling of fear.
Everyone should desire to see dreams of receiving letters from God, and not from the enemy. I say so because, the moment the kingdom of darkness sends anyone a letter in a dream, there is always a deadly spiritual attack awaiting the dreamer.

In the physical world, when a person receives a new email or a text message in their phone, they always immediately know that there is a new information delivered to them. The case isn't very different when it comes to receiving a letter in the dream.
Letter dreams are no ordinary dreams. There is always a very vital information delivered to the dreamer through such dreams.
Since I earlier highlighted three major sources of letter dreams above, let's quickly take a look at them below.

God speaks to us through various ways. One of the most common medium the Lord uses in communicating with us is dreams.

Job 33:14-15 NLT
For God speaks again and again, though people do not recognize it. He speaks in dreams, in visions of the night, when deep sleep falls on people as they lie in their beds.

No one can predict how God will speak to them in their dreams, so it is wise we stay open to receive communications from Him, in whichever way it may come.
Although on very rare occasions, God may choose to deliver very important information to people through letters in dreams. I'm sure that no one needs to be told to treat such dreams as extremely important.
Letter dreams from God are often very prophetic dreams. An instruction or a warning from God could be sent to the dreamer via a letter in their dreams. It is very unwise to forget the content of that letter.

2. Letter Dreams From Another Person

We live in a spiritual world, and life is more spiritual than it is physical. It is possible to send someone else a letter in a dream (intentionally or unintentionally).
In most cases, people send other people letters in their dreams unintentionally and unknowingly. More than 80% of those who send their friends, families and loved ones letters in dreams end up not being aware they did such a thing.
Most occurrences of sending someone a letter in their dreams often happen through the “thought process”. For instance, if you have been on someone's mind for many days, and they have a thing they wish they could tell you—but don't know how to communicate to you or are reluctant to do so for reasons best know to them—that very thing that person is wishing to tell you can come to you as a letter in a dream.
This often happens autonomously due to the fact that there is a strong projection of thoughts from one person to another. What someone wishes to tell you but couldn't say it to you directly in the physical world, has the power to come to you as a letter from them in a dream. Since man is a spirit being, such occurrences shouldn't be seen as weird for any reason.
Therefore, if you received a letter from a friend or someone you know in your dream, treat it as very vital. See it as the unsaid thoughts in their mind concerning you, delivered to you in a dream. You don't necessarily have to reach out to the individual, but understand that what you received as a letter in your dream from them, is what they are thinking of you.
Also, be informed that if you constantly think a particular thing about someone without telling them, it could manifest to them as a letter from you in a dream.

3. Letter Dreams From The Enemy

The kingdom of darkness also sends people letters in their dreams, and in most cases, the content of such letters always come as a threat to the dreamer.
There are also rare occasions where a human agent of darkness can send other people letters in dreams. Such occurrences are very intentional.
So if a Christian receives a letter (full of threats) that tends to come from the kingdom of darkness in their dream, it is unwise to discard such a dream as an ordinary dream.
You just received what the enemy thinks of you or is plotting against you via a letter dream. The fact that they made it that open and delivered it to you before going on to execute it, means that they mean every word they said in that letter, but the intention is to scare you—so that you don't confront them to destroy their plots. This is just the enemy's cheap trick, don't fall for it.

Proverbs 28:1 NLT
The wicked run away when no one is chasing them, but the godly are as bold as lions.

As a Christian who just saw such a dream, always remember that the One who in you is Greater. God doesn't expect a Christian to tuck their tail like a scared dog and run into hiding, when the enemy threatens them.
You're actually at advantage, if the enemy tries to scare you by telling you what he intends to do to you. It shows that he's the one who is scared of you, but only trying to play the fear card against you. Always seize such an opportunity to pray and destroy his plots against you before they have a chance to manifest.

Daniel 5:5 NIV
Suddenly the fingers of a human hand appeared and wrote on the plaster of the wall, near the lampstand in the royal palace. The king watched the hand as it wrote.

Dreams of handwritten notes always remind me of the handwriting on the wall in the book of Daniel. As we know it, this handwriting was from God and it delivered a very important message to the then king of Babylon, which only Daniel could interpret.
It is normal and a frequent occurrence for Prophets to receive handwritten notes from God in their dreams. Such a dream always carries very important instructions and revelations from God.
A handwritten note can also come as a message from someone you know, expressing their unsaid thoughts and feelings to you in a dream. It is important to grasp every bit of information communicated to you in such dreams.

Dreaming About Receiving A Love Letter From Someone

Dreaming Of Reading A Letter

Not everyone is able to decipher and read the information contained in the letters sent to them in dreams. Some often wake up before they could be able to read it.
If you were able to read a letter in your dream, it means that you successfully received the information sent to you (by whosoever sent it).
If the content of the letter came as instructions from God, make sure you carryout those instructions. If the content of the letter warned you of impending danger, pray hard and do your best to avert it. If the letter carried threats from the enemy, report it back to God and pray to destroy the plots of the enemy against your life.
Count yourself blessed to be able to receive revelations from God, what people are thinking of you and what the enemy is plotting against you through letters in dreams, because not everyone can see such dreams.

Final Words On Receiving A Letter In A Dream

Now that you understand what it means to receive a letter in the dream, I trust that you also understand what to do with a letter dream, if you happen to see one.
Receiving a letter in a dream isn't something that happens frequently. Whenever this dream shows up, it is advisable the dreamer receives it as a wake up call, and treats the information contained in the letter as urgent and very important.
Beloved, I trust that you were blessed reading the spiritual meaning of receiving a letter in the dream. If this is so, then go ahead and share this article. Also, do not forget to recommend our blog to someone else.
Remain blessed.