If you got bit by a snake in your dream, and you want to find out its meaning, here is the spiritual meaning of snake bite in the dream. 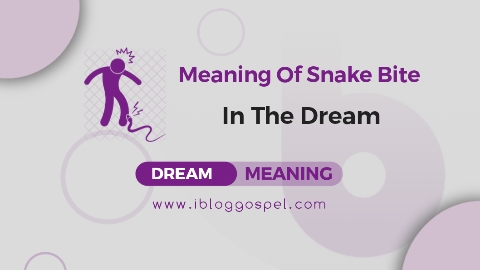 Snake dreams come in various forms. While some dreams about snakes are confusing and some don't look so serious, there are other snake dreams that are very serious and sometimes scary. An example of such a dream is a dream about snake bite.
If you saw a dream where you got bit by a snake, I'm sure you instinctively know that such a dream is not a good one.
In our previous dream interpretation of snakes, I made mention of the fact that snakes in dreams don't represent something good; they often represent the Devil, demons or very evil people.

Luke 10:19 NIV
I have given you authority to trample on snakes and scorpions and to overcome all the power of the enemy; nothing will harm you.

In Luke 10:19, when the Lord made the decree that He has given us authority over serpents and scorpions, He was literally saying that He has given us power over the enemy, his minions and his works.
That is to say, whenever you see a snake in your dream, you should know that such a dream is not godly; it is a manifestation of agents of darkness and their works. The good news is that God has given you power to destroy the effects of such dreams through prayer.
We are further shown in the book of Genesis 49:17, that the major assignment of snakes is to cause harm. Hence, snakes are rarely beneficial to man.

Genesis 49:17 NIV
Dan will be a snake by the roadside, a viper along the path, that bites the horse’s heels so that its rider tumbles backward.

Even in the physical realm, the very image of a snake gives off a eerie vibe; the presence of a snake often scares people away.
Research has it that, approximately 7,400 people get bitten by snakes daily. I'm yet to know how beneficial snakes are to man, compared to how harmful they have been over the years.

Snake bites are not only brutal but deadly. For this reason, many don't care to differentiate between venomous and non-venomous snakes or treat them differently. The very moment some people spot a snake, their next move is always to kill it before it has a chance to strike.
The enemy operates as cunning and deadly as a snake does. Satan took the form of a snake in the Garden of the Eden for a reason; it is the snake that perfectly portrays his evil personality and operations.
If snakes in the physical world are deadly, then snakes in dreams are twice as deadly. Yet, the snake bite itself isn't as deadly as the venom the snake introduces into the bloodstream of its victim when it bites them.
It is the venom of the snake that causes death, if the snake bite is not treated in time. Likewise, snake bite in dreams is one of the enemy's deadliest spiritual attacks against people!
When the enemy attacks a person in their dream by feeding them spiritual poison as food, something evil is deposited in the dreamer—and that person cannot remain the same—if the effects of that dream are not prayed against and cancelled.
The same happens when a snake bites someone in their dream; the enemy has deposited something evil in that person, which is intended to bring about their all-round destruction.
If you got bit by a snake in your dream, I pray for you today, that all works of the enemy purposed against your life through snake bite dreams be thwarted, in the Mighty Name of Jesus Christ!

The Bible acknowledges the fact that the enemy came to kill, to steal and to destroy (John 10:10). While some attacks of the enemy may not be so obnoxious, some are very offensive and extremely treacherous!
Snake bite attacks in dreams are often launched against people that they enemy has plotted to completely destroy as soon as possible. That is how life-threatening such attacks could be!
It is by God's grace that people wake up from spiritual attacks like snake bite in dreams. There are many who have lost their lives in their sleep due to such attacks, and didn't live to tell what caused their death.
The enemy launches snake dream attacks against people for the following reasons:
There are people who wake up from snake bite dreams and fall terribly ill, even to the point of death. Some begin to experience setbacks in all their life endeavors, deteriorating health, and the list goes on. This is one reason why no one should treat such a dream lightly, if they happen to see it.

Apparently, snake bite dreams are very bad dreams. As earlier stated, snakes spiritually represent the Devil, his demons or very evil people. That being said, not every snake bite dream may be a direct attack from Satan or demons.

Some snake bite dreams prove that there are very evil people in the life of the dreamer. For them to have the opportunity to spiritually strike the dreamer, it means that they have been lurking around the dreamer unnoticed, and plotting against them for a long time.
This is why we must be very discerning, when it comes to the people we give access to our life. It is not enough to physically know the people in your life, it is more important to know who they are spiritually.
Evil friends could manifest as snakes in dreams. If you got bit by a snake in your dreams, this could tell that there are evil acquaintances in your life who are secretly plotting and doing evil against you. A very important step is to know who to be close to and who to keep your distance from.

Isaiah 27:1 NLT
In that day the LORD will take his terrible, swift sword and punish Leviathan, the swiftly moving serpent, the coiling, writhing serpent. He will kill the dragon of the sea.

The Lord said that He will punish the evil snake that goes about doing evil things. Take this as your word and ask the Lord to move on your behalf and punish every spiritual serpent rearing its ugly head against you—be it demons or humans!

Prayer Against Snake Bite In The Dream

Beloved, if you ever experience a snake bite in a dream, you have to remember to act swiftly against such a dream through prayer.
It is good to ask for deliverance from an Anointed man of God after seeing such a dream, but you also have to stay prayed up so that such a dream doesn't repeat itself again.
If you found this Christian dream interpretation useful, go on and share this article with your friends and family.
God bless you.