Dream About A Funeral Meaning

There's been many requests for the interpretation of dreams about funerals. I believe this article will answer many questions on funeral dreams. 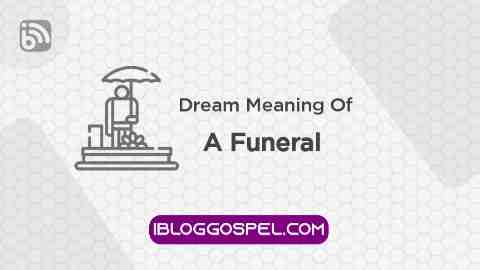 Out of all the dreams that people see daily, a dream about funeral tends to be one of the most disturbing. Today we will delve into the meaning of funeral in dreams from a Biblical and Christian perspective.
If you just woke up from a dream where you saw a funeral or saw yourself attending a funeral, you may had been baffled concerning what it could mean. Probably you may also be worried about what such a dream could trigger in the physical world. Rest assured, you'll get to learn that and more as you read further.
If you stumbled on this article during your search for a dream interpretation on this, I believe it's all the Lord's doing. Let's trust the Holy Spirit to unveil to us the meaning of your dream (and proffer a solution for such dreams) in this article.

Psalm 68:20 NLT
Our God is a God who saves! The Sovereign LORD rescues us from death.

It is true that a dream about a funeral often rouses curiosity (and sometimes, fear) in the dreamer. But like I've always said, our response to scary dreams shouldn't be fear, knowing that God's got us. The best approach will always be to find out the accurate spiritual meaning of our dreams and follow God's leading and instruction to avert the dangers such dreams may pose.

Apparently, dreams about funerals are rampant—both among the old and young; saved and unsaved. Eight out of every ten persons will admit to have seen (in the past) or occasionally see dreams about burials.
I can tell that dreaming of funerals isn't fun; it's not one of those pleasant dreams that people see. I've never met anyone who enjoys seeing such dreams and want them to continue.
Dreams about funerals rarely come from God; but when they do, they're often either a revelation or a warning concerning an impending danger. Apart from this, if a person frequently sees dreams about funerals, they need to treat it seriously and find out what they must do to prevent such dreams from continuing.

Although some try to give a lucky interpretation to funeral dreams, I see nothing lucky about such dreams. As much as there's nothing lucky about death, there's also nothing seeing funerals in dreams. The Lord made it clear in His Word that He is not God of the dead but of the living (Luke 20:37-38).

Death wasn't in the original plan of God for man. It is actually a “man-made” invention resulting from his fall in the garden of Eden. Death often marks the end of life or the end of something good, but God brings dead things to life (1 Samuel 2:6). Our God does not lead us to death, instead He delivers from death. You'll agree with me that there's clearly nothing lucky or positive about seeing funerals in dreams.

I'm aware that certain people love attending funerals, but if you're also constantly attending them in your dreams, you need to question a lot of things and start praying really hard against these dreams.
To be more specific, dreams about funerals often portend the following:
If you're frequently seeing dreams about funerals, please do not take them lightly. Remember that the enemy did not cease from carrying out his three-pronged assignment of stealing, killing and destroying (John 10:10). The Bible lets us understand that the enemy prowls like a roaring lion looking for whom to devour (1 Peter 5:8). We must not be ignorant of his devices but be alert at all times, resisting every attempt of his to cause destruction in our lives and around us.

Spiritual Meaning Of Dreaming Someone Died

A dream about funeral of someone is a possible revelation from God concerning the sudden death of that individual.
Concerning the spiritual meaning of dreaming someone died, it's no big deal if someone dreams about the demise of someone who is old enough for a transition. But if you saw a dream where someone who is still young and vibrant died, you must understand that such death is far from being the will of God. Such dreams are often a revelation alerting the dreamer that the enemy has plotted to terminate a life prematurely. If you saw this dream, your responsibility is to intercede in order to abort this plot of the enemy against that individual.

Dream Of Being Buried

It is surprising that many people often see their own funeral several times but always feel it's just a dream and nothing will happen. Only when it happens, then it's already too late.
A person who sees a dream of their own self being buried must understand that the enemy has released the spirit of death against them. A deadly spiritual attack has been launched to ensure that by all means their life is terminated.
If you saw this dream, do not just ignore and go about your business. In most cases, the sort of dreams we see reflect what is currently happening around us that we can't see while awake. That is why it's inadvisable to forget our dreams or treat them as nothing.
Be it once or frequently that you see dreams of your own funeral or dream of being buried, you need to quickly go into fasting and use warfare prayers to demolish the works of darkness against your life before they are manifested.

Dream Of Funeral Of Someone Alive

If you saw a dream of funeral of someone alive, you're at the discretion of letting or not letting them know. But make sure you pray for them.
If the person is old enough to transition to glory, you need not worry much. But if this dream was concerning someone who is young and still has a lot to achieve in life, you have to earnestly intercede for them. It's unexpected of a Christian to receive such revelations only to sit back and watch the enemy cut off a person prematurely.
For better understanding, let's wrap up a few points on what we've learned so far concerning funeral dreams as follows:

There are people who frequently see the funeral of someone who is already dead. Sometimes, it's the funeral of their deceased loved ones who had long been dead.
If you're one of those seeing such dreams, know that there's nothing okay about it. Some are always deceived into believing that their deceased loved ones are trying to communicate with them whenever they show up in dreams. But this is just one of the many manipulations of the enemy. Do not be caught in it.

Ecclesiastes 9:5 NLT
The living at least know they will die, but the dead know nothing. They have no further reward, nor are they remembered.

The Psalmist made it clear in scriptures, that the dead knows nothing. You need to start rebuking and rejecting some sort of dreams. Do not fall for the deception that they want to communicate with you (even the Bible is against that).
Frequently dreaming of the funeral of someone already dead may also be a sign that the spirit of death lingers around the dreamer—the mission is to kill within the slightest opportunity. Stay alert and stay prayerful!

Final Words On Dream About Funeral

Beloved, I trust that this article is exactly what you needed to read concerning a dream about a funeral. I'm sure no one loves dreaming about funerals and such dreams shouldn't be allowed to continue. Make sure you use the guide and prayers herein effectively.
If you were blessed reading, do not hesitate to share with as many as you can.
Thanks and Remain blessed!