Spiritual Meaning Of Being Chased In A Dream 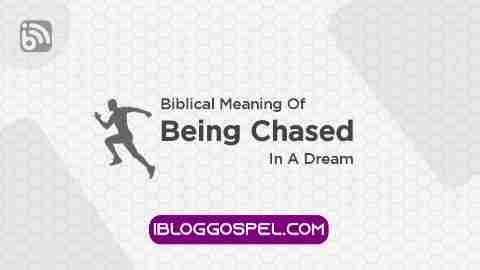 One of the most common dreams that people (reportedly) frequently see, happens to be dream about being chased. At least eight out of every ten persons will admit that they've seen dreams where they were chased either by a man, woman, police or an animal. Today, we'll look at the spiritual meaning of being chased in a dream — from a Biblical perspective.
What exactly chases people in their dreams and why do dreams about being chased happen to be so common and frequent? These are some questions that should pique our curiosity. Let's trust the Holy Spirit to provide clear and helpful insight into the meaning of this dream.

I believe that a dream about being chased is a very important dream — such that no one should ignore or rate as irrelevant. I think they shouldn't be discarded as “just a dream”; instead, the dreamer should find the scriptural interpretation and possible solution to such dreams.
I'm aware of the fact that dreams about being chased doesn't just come to Christians alone. They are oftenly seen by both Christians and non-Christians. I've overheard unbelivers repeatedly talk about getting chased in their dreams too.
Some of these dreams often come in the following forms:
Let's trust the Lord to enable us touch on these as we proceed.

What Does Being Chased In A Dream Mean?

Whenever people find themselves being chased in a dream, there's always this feeling of fear within the dream. Dreams from God are often peaceful, but fear is the weapon of the enemy. A dream that has the component of fear in it is rarely from God.

What is the spiritual meaning of being chased in a dream ?

Being chased in a dream signales a spiritual attack; possibly an ongoing spiritual attack against the dreamer. With this understanding, such dreams must be confronted and prevented from continuing.

1 Peter 5:8 KJV
Be sober, be vigilant; because your adversary the devil, as a roaring lion, walketh about, seeking whom he may devour.

The activities of the enemy are multifaceted; and if possible, he would always prefer to conceal his attacks and cover up his tracks so that they never get noticed. But we're not ignorant of his devices (2 Corinthians 2:11).
The Bible instructs us to be sober and vigilant, because the devil prowls like a lion, seeking whom to devour. Seeing a dream about being chased is often a sign that the enemy is all out once again, against the dreamer. Such dreams are often followed by series of other spiritual confrontation dreams. If you happen to see such a dream, understand that it is time to sit up and pray more. Don't sulk but confront your adversary through spiritual warfare.

1 Peter 5:9 KJV
Whom resist stedfast in the faith, knowing that the same afflictions are accomplished in your brethren that are in the world.

Whenever a person finds his/herself being chased in a dream, they must understand that they are under attack — a serious spiritual attack. That isn't a time to slack in prayer or your relationship with God; if you do, that might give the enemy the opportunity to succeed in causing you harm.

Proverbs 28:1 KJV
The wicked flee when no man pursueth: but the righteous are bold as a lion.

The Bible makes us understand that it is the enemy who is supposed to be running from us and not the other way around. The righteous is expected to be as bold as a lion; standing tall to confront and curtail the activities of darkness. The Lion of the tribe of Judah isn't timid, therefore a Christian shouldn't be also.
Jesus Christ is the only source of victory in spiritual warfare. If you have not yet accepted Him into your heart as your personal Lord and Saviour, go ahead and pray this salvation prayer.

Biblical Meaning Of Being Chased In A Dream

Exodus 15:9 KJV
The enemy said, I will pursue, I will overtake, I will divide the spoil; my lust shall be satisfied upon them; I will draw my sword, my hand shall destroy them.

The enemy always has a plot against the people of God but the Lord always plans ahead of him. If you walk closely with God, you can be rest assured that your victory is always guaranteed.
The enemy can be very tricky in his attacks. Sometimes, he chooses to cloak his presence and activities by using the faces of loved ones to chase people in their dreams. This calls for wisdom, that we don't go about randomly accusing people of being a witch or warlock; simply because we saw them chasing us in a dream. We must always resist such temptation.
Also know that demons are fond of using the faces of real people (including people we may know) to attack in dreams. If you're knowledgeable on how to make them reveal their true identity, you'll always find that they were covering up by using the face and appearance of a person.
There is also the possibility of the enemy using a witch or warlock to chase a Christian in their dream (and this person might decide to use their real face). I'm not going to write off such possibility because it's actually happening.

2 Samuel 17:1 KJV
Moreover Ahithophel said unto Absalom, Let me now choose out twelve thousand men, and I will arise and pursue after David this night.

There exist evil persons who are bent on seeing that the innocent are cut off from the face of the earth. An example of such people was king Saul who confronted and chased after David to destroy him. Today, an evil person will rarely chase after a person in the physical to destroy them, but in the spiritual. I'm sure you get what that means.

Dream Of Being Hunted Down To Be Killed

What does it mean when you dream about someone chasing you and trying to kill you?
The intent for which the enemy chases anyone in their dream is often to trap spiritually and possibly destroy them.

The overall goal of Satan has been revealed to us in the Word of God. The kingdom of darkness doesn't go after anyone to catch fun with them; it is always for the purpose of destruction. Every Christian should understand this, live and act accordingly.
If you happen to frequently see a dream about being hunted down to be killed, this should become one of your prayer points:

Psalm 35:3 KJV
Draw out also the spear, and stop the way against them that persecute me: say unto my soul, I am thy salvation.

Dreams of being chased or hunted down to be killed are very serious dreams. When spiritual attacks get intense, that is not a time to take a spiritual break; it is a time to upgrade your spiritual life and draw from God to strike back against the enemy. During these times, engaging in fasting and prayers can be very helpful.

Prayer Against Being Chased In A Dream

N/B: We don't believe in killing other people through prayers. Desist from praying such prayers. We believe a Christian is [suppose to be] unstoppable; that is the essence of having and exercising dominion in Christ. As a Christian, you've been equipped with all it takes to put the activities of darkness in check and move on to fulfil your destiny unstoppable. No witch or warlock is powerful enough to stop a person whose life is in complete submission to God Almighty.

Final Words On Dream About Being Chased

Beloved, I trust that you got a clear and satisfactory interpretation on the spiritual meaning of being chased in a dream from this article.
If you need a personal interpretation concerning a related dream, feel free to reach out to me.
If you were blessed reading this dream interpretation, do not hesitate to share with others.
God bless you!