Dreaming Of Being Robbed

Here is a Biblical and spiritual meaning of dreams of being robbed. Many people have seen similar dreams, so let's see what they mean. 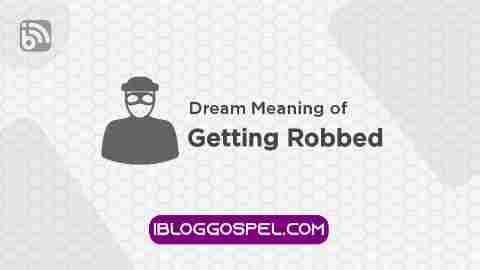 Seeing a dream of getting robbed does not happen frequently, but whenever such dreams show up, the dreamer has to pay careful attention; because there's often something very important God is trying to reveal to them.
I understand that dreams of being robbed can leave the dreamer scared and perplexed concerning what might happen to them in their waking life, but responding with fear to these sort of dreams is never the best choice. The enemy and evil people will always plot but understand that God is always steps ahead of them.

Ephesians 4:28 KJV
Let him that stole steal no more: but rather let him labour, working with his hands the thing which is good, that he may have to give to him that needeth.

First of all, we're grateful to God for the gift of dreaming. Because without it evil would befall many without notice. The Holy Spirit is a revealer of secrets and dreams happen to be the primary means through which He brings most of these revelations. Everyone should pay attention to the dreams they see.
Have you ever seen or do you occasionally see yourself getting robbed in a dream? You're not alone in this. A good number of other people have seen similar dreams, such as:
The wrong approach that many often take towards these kind of dreams is saying that nothing will happen, but that's not often the case. Many have been surprised by an actual robbery attack after seeing such dreams.
Some dreams often come to us as a warning, so that we would be more careful; and that is what a dream about getting robbed happens to be.

What Does It Mean When You Dream About Being Robbed?

The act of stealing is neither from God nor did it emanate from Him. Stealing is a sin and Satan the devil is the source of every form of sin.

According to the holy Bible, the enemy came to steal, to kill and to destroy. And his dimension of stealing goes beyond the spiritual. It might interest you to know that the devil is envious of even the material wealth and possessions which God has given to a Christian. The desire of the enemy is to see a child of God suffer unduly and live a wretched life on earth. If there is anything God has given to a Believer, the enemy is always bent on robbing them of that thing.
Let me stress it once again, that the stealing activities of the enemy are not limited to the spiritual realm. The enemy is jealous and envious of every good thing a child of God has. If there is any means through which he can seize all from them, he would always go extra miles to do just that.
The spirit of theft is what works in many to give them the idea of taking what doesn't belong to them (and this spirit is not from God). Whenever you see a dream of getting robbed, understand that there is something valuable that you have. It irritates the enemy that you have that thing and the kingdom of darkness desperately wants to rob you of it.

Spiritual Meaning Of Getting Robbed

Whenever a person sees a dream of getting robbed, it is not a time to predict whether this is gonna come as a spiritual or physical form of robbery. It is a time to pray to avert whatever form of robbery the enemy has plotted against you.

One valid fact that no genuine Christian can deny is that, it isn't just demons who are against them — but also other people. People don't need to have any reason to hate you, and funny enough, some will go to the extreme of plotting evil against you.
Seeing a dream of getting robbed may rarely mean that demons are trying to steal something from you. In most cases, it means that there are people who are envious of your progress; they are envious of God's blessings upon your life and want to lay hold of some for themselves. Some of these people can go to the extent of plotting and scheming ways they can make you lose what God has given to you.
When God said that, “surely they will gather,” He didn't limit it to demons. In most cases, these are fellow humans and agents of darkness who think you don't deserve the things you have; that they should be taken away from you. These people are as well carrying out the will and assignment of their master, the devil (as seen in John 10:10) — to rob a child of God of God's provision upon their life.
If you happen to see a dream of getting robbed, rise up and pray ruggedly against the evil conspiracy of whoever is plotting to steal from you. Ask God to intervene to frustrate and expose them. It is unwise to only assume that nothing will happen and move on.

Dream Of Being Robbed At Gunpoint

If you dream of being robbed at gunpoint, pray against an impending plot of robbery attack against you, especially during road trips.
Like I earlier said, in most cases, dreams of getting robbed come as a warning, exposing what a person or group of people are plotting against the dreamer.

Psalm 141:9-10 KJV
Keep me from the snares which they have laid for me, and the gins of the workers of iniquity. [10] Let the wicked fall into their own nets, whilst that I withal escape.

The Holy Spirit reveals even to the smallest details. It is not part of the character of God to sit back and watch a Believer taken by surprise by a robber. If God reveals, there's no point trying to interpret it to mean something else. Simply go ahead and pray! Ask God to help you escape the snare of your enemies.

Dream Of House Being Broken Into

One might be quick to discard a dream of their house being broken into, as just a “mere dream.” But what happens when such a dream keeps on repeating itself? God is warning you of something and it may be required that you take necessary steps as soon as possible, in order to be safe!
A good number of people have seen these sort of dreams but wouldn't pay attention, only for their home to get broken into the next week.

Proverbs 22:3 KJV
A prudent man foreseeth the evil, and hideth himself: but the simple pass on, and are punished.

God will always alert a Christian of what the enemy is plotting ahead of time. It is our responsibility to seek for His guidance on what to do and follow His instructions.
In most cases, dreaming of being robbed at home portends a planned robbery attack against the dreamer in their home. Do not only pray but also take precautionary measures to safeguard your home and properties.

Dream Of Being Robbed Of Money

A dream of being robbed of money is less likely to mean that the dreamer will physically get robbed of their money (although not completely denying the possibility).
In most cases, dreams of being robbed of money is a sign of a spiritual attack against one's finances [be reminded that the enemy steals both physically and spiritually].
If you happen to see this sort of dream, rise up and war against every form of attack from the kingdom of darkness against your finances. Go ahead and make use of these prayers against financial attack.

Dream Of Being Robbed Of Phone

Dream Of Being Robbed By Someone You Know

If a person sees theirself being robbed by someone they know, it is unwise to automatically conclude the one they saw in their dream is about to rob them. Don't start problems with someone because you saw a negative dream about them.
Dreams like this are meant to be handled wisely. If the Holy Spirit impresses upon your spirit that this person is truly the culprit plotting to steal from you, the best thing is to disconnect from them and keep your distance from them. Protect yourself!
Understand that whatever plot it is that anyone has against you, so long you are innocent, their plot will always fail when you pray. God will always give you the wisdom to escape the snares of your enemies. Amen!

Prayer For Dreams Of Being Robbed

Final Words On Dreams Of Being Robbed

The enemy doesn't just hate a child of God but also all that he/she has. The manifestion of a dream about being robbed can either be physical or spiritual — since the kingdom of darkness does both dimensions of stealing.
Do not overlook these dreams but take them seriously. As much as God doesn't want evil to befall us, He will always warn us beforehand. It is our responsibility to follow His instructions and leading in order to avert mishaps.
Remain blessed.