If we have a daughter who isn't living the way they're suppose to live and is disrespectful, we may need these prayers for disrespectful daughter. 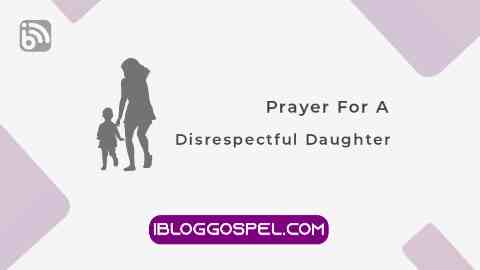 Parenting happens to be one of the most daunting tasks that anyone can carryout. But as Christians, I believe we're in a better place to produce godly seeds. Concerning this, today we will learn more than just prayers for a disrespectful daughter.
Many are often clueless on the right way to raise their child; some become frustrated and helpless when things get out of hand between them and their children. There is no other manual that expressly and perfectly defines how parents should raise their kids except the holy Bible.

Proverbs 22:6 ESV
Train up a child in the way he should go; even when he is old he will not depart from it.

The Bible makes us understand that “children are an heritage from the Lord” (Psalm 127:3). Which means that the original owner of our children is our Heavenly Father. We're assigned to be guardians whose responsibility is to love and cherish them, teach our children, and lead them to eternal life.
Since Heaven depends on us to raise godly offsprings, we as well must ensure that we do our best to bring this to pass. So that at the end of the day, if a child becomes rebellious and disrespectful, God wouldn't hold us accountable.
Let's glean a little from the story of Eli and his children:
Hophni and Phinehas were the sons of Eli, the high priest in Shiloh. For unknown reasons, the children were not raised to be godly men. Fast forward, Eli grew old and his children (who were presumably in their thirties) took over the role of performing the temple rites from their father. From the outcome of how they handled the ministry passed down to them, it was evident that their father had failed to raise them in a godly manner.

1 Samuel 2:22-25 NLT
Now Eli was very old, but he was aware of what his sons were doing to the people of Israel. He knew, for instance, that his sons were seducing the young women who assisted at the entrance of the Tabernacle. Eli said to them, “I have been hearing reports from all the people about the wicked things you are doing. Why do you keep sinning? You must stop, my sons! The reports I hear among the LORD’s people are not good. If someone sins against another person, God can mediate for the guilty party. But if someone sins against the LORD, who can intercede?” But Eli’s sons wouldn’t listen to their father...

Apparently, Eli was a good man—a public and influential figure in Israel. Yet, he refused to use his position as a high priest to discipline his children. Instead of discipline, Eli's sons enjoyed more privileges than other children of Israel.
As a result of their rebellion and desecration of God's temple, the anger of the Lord was kindled—first against their father, and then against them as his sons. Note that Eli was the one who God held accountable for his children's misdeeds, and his sons were put to death.
Here is what God said to Eli:

1 Samuel 2:29-31 ESV
Why then do you scorn my sacrifices and my offerings that I commanded for my dwelling, and honor your sons above me by fattening yourselves on the choicest parts of every offering of my people Israel?’ Therefore the LORD, the God of Israel, declares: ‘I promised that your house and the house of your father should go in and out before me forever,’ but now the LORD declares: ‘Far be it from me, for those who honor me I will honor, and those who despise me shall be lightly esteemed. Behold, the days are coming when I will cut off your strength and the strength of your father’s house, so that there will not be an old man in your house.

As of today, no Christian names their children after Hophni and Phinehas, and I'm sure there are many of us who don't want to have the same fate as Eli and his sons.
Well, I hope that sank in. So let's get back to parenting in this day and age.

Godly Parenting In The 21st Century

There are many approaches to parenting today. Some of them include:
Although a number of these approaches are in line with scriptures, most of them are psychologically derived and they negate scriptural principles. Before you consider using any of these methods, find out whether they line up with God's word or not. Remember that the holy Bible remains the best resource for raising Godly children.
I love prayers, but we have to use them correctly. The Bible emphasizes more on imbibing godly principles in our children (right from infancy) and watching them grow up that way into adults. Prayer is like to balm that should be applied at every stage of our child's growth, in order to curb potential undesirable traits before they start to manifest. But in a situation where the parent(s) or guardians failed to raise their kids this way, then prayer for change remains the last resort.

Things That Could Make A Child Disrespectful

Below are a few factors that could cause a child to be rebellious or disrespectful, and how to curb them:

Everyone is born innocent. A toddler knows nothing. What they learn, how they grow up to behave and how they do things depends much on parental influence. If parents do their job as much as God expects them to, at the end of the day, they will have a child they can be proud of.

One of the fears that often come with watching your child grow up into a teenager is the fear of them becoming rebellious and disrespectful. But if a child is raised in a godly manner (under the watchful eyes of parents), such fear should be less or absent.
When attaining adolescence, children tend to want to prove to their parents that they're no longer “small” and shouldn't be treated as such. But this is also the appropriate time for parents to remind them they are not allowed to become unruly. Godly discipline has to be instilled—and if necessary, in a bit strict manner.
Most importantly, ensure that there's a balance between discipline and love. You don't want to love your children to their own destruction, and you don't want your children to think you are wicked to them. So, ensure balance!

3. When Boundaries Are Set

Children love to do what they like, without considering whether they're right or wrong. It is the parents' duty to ensure that children understand certain things are unacceptable and stick to that rule.
Set clear boundaries and do not compromise on them. From time to time, children will test boundaries to see which one they can defy and go against. Parents must ensure they don't compromise on what they don't expect from their children.

4. The Fight For Independence

When a child grows up, at a certain stage they will start believing they are already adults; and they assume adults do what they like without no one stopping them. Always remember that a child who doesn't live right with their parents will not live right even after separating from their parents.
You don't want to raise a child who goes out to become a public nuisance. So remind them that even though they're growing towards becoming independent, that isn't an excuse for becoming rebellious and disrespectful to parents or anyone else.

So let's assume that you applied all the above principles in the upbringing of your child and they were ineffective (which is very rare). Or for whatever reason, your child grew up to be disrespectful, then you can use these prayers:

The above prayer points can as well be used on a disrespectful son. Just replace “my daughter” with “my son” or your son's name. Replace “her” with “him,” and also feel free to pray more prayer points as led.

In most cases, the behaviour of our children is influenced by the society at large. But this isn't an excuse. Remember that society will still put the blame on parents for a child's bad behaviour. This tells us that greater necessity is laid on you as a parent, to produce a child you and the society will be proud of. Make efforts to program your children according to God's principles before the society programs them for you.
Sometimes, it's also good to let your children learn to do right by experience. Although this is learning the hard way, it might work in some cases, while you keep on interceding for them.
If you were blessed reading this article on prayer for disrespectful daughter, do not hesitate to share with others.
Remain blessed.