Biblical Meaning Of Someone Trying To Kill You

There are many who keep dreaming about killing someone and are baffled on what the mean. Let's see the meaning in this article. 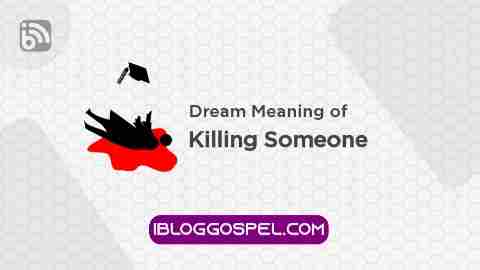 Luke 11:21-22 KJV
When a strong man armed keepeth his palace, his goods are in peace: [22] But when a stronger than he shall come upon him, and overcome him, he taketh from him all his armour wherein he trusted, and divideth his spoils.

Have you ever seen a dream where you killed someone? A good number of others have seen similar dreams. I understand that some of these dreams can leave one baffled concerning what the physical manifestion of it might be. We trust the Lord to give you the right interpretation through this article.
Many have reportedly seen related dreams of murder as follows:
The psychological meaning of dreams about killing someone can be very scary, but on our blog we deal with dream interpretations from a Biblical and Christian perspective. The dream meaning of killing someone is a sensitive one, so we will rely on the Holy Spirit to help us unwrap the meaning behind these dreams as He sees fit.

Spiritual Meaning Of Killing Someone In A Dream

The dream meaning of killing someone is not always a bad omen. We can approach the spiritual meaning of this dream from different angles as follows:

Dreams about killing someone could be God's way of warning the dreamer to take heed and keep their temperament in check, so they don't get in trouble.
The enemy is always plotting and scheming; and sometimes, people don't know his next move or the angle from which he will launch the next attack. Some who have had a count of murder didn't do it intentionally. In some cases, it happened that someone offended them and they hit the person out of anger; what transpired from there was death.
Such occurrence isn't always a happenstance. Sometimes it is a setup by the kingdom of darkness and the target [unfortunately] fell into the trap.
If you have a serious conflict with anyone that could possibly result to a physical fight, (and you happen to see this dream) my advice is that you don't take it lightly and don't ignore it. This could be God's way of trying to deliver you out of trouble.

2. It Could Portray Unforgiveness

In today's Christianity [and especially in Africa], there are many Christians who believe in killing their enemies through prayers. We don't provide such prayers on our blog because they are not scriptural.
The act of trying to terminate the lives of “perceived enemies” through prayers is like witchcraft; it stems from a heart filled with hate and unforgiveness.
No matter how evil a person is and no matter how much you think they are attacking you spiritually, remember that God gave them life and He could also take it if He wanted to. But He is merciful, giving them time to repent. What then do we profit if the sinner dies in their sin by our own doing, and without repentance?

2 Peter 3:9 KJV
The Lord is not slack concerning his promise, as some men count slackness; but is longsuffering to us-ward, not willing that any should perish, but that all should come to repentance.

The holy Bible shows us better ways to live victoriously above the attacks of the enemy against us (including those that stem from his human agents). That is the essence of dominion in Christ — every Christian should harness it.
It's surprising that some Christians are fond of praying “dangerous prayers” to kill evil people. The source of certain dreams of killing someone could be an unforgiving heart which has always wished to get their enemies killed.

3. It Could Represent Victory In Spiritual Warfare

In some other cases, a dream about killing someone can be a confirmation that you've finally laid hold of your long-awaited victory in spiritual warfare. Follow up as we discuss more on this below.

Dreaming About Killing Someone

Contrary to what many speculate, dreams about killing someone is not always bad. Have you been facing intense spiritual warfare? Such dreams could occasionally come as a pointer to the fact that you're obtaining your victory in spiritual warfare.

The dream world is part of the spiritual realm and over there confrontations constantly happen. If an agent of darkness confronts an Anointed Christian in their dream, it is hard to predict how the victory may come.
Self-defence in the spirit realm is legal and we wrestle not against flesh and blood (Ephesians 6:12). The spirit realm is for spirits, and spirits don't die. If an agent of darkness gets killed in a dream, it is clearly not a physical death but spiritual victory for the Christian.

2. Victory Over A Long-Term Battle

Sometimes, dreams about killing someone could show up to confirm that a Christian has finally obtained their victory over a spiritual battle that had persisted in their life for years. After seeing such a dream, the Christian may no longer experience spiritual warfare stemming from that very source. This can be God's way of letting the Believer know that He has put a stop to the battle that had plagued their life for many years.

3. It Could Represent Subduing The Strong Man

Some Christians are born into families where a spiritual strong man (a high-ranking dark spirit) strives to put everyone under his grip.

Mark 3:27 KJV
No man can enter into a strong man's house, and spoil his goods, except he will first bind the strong man; and then he will spoil his house.

When a true child of God shows up in such a family, God will often equip and start using them against this “strong man”. If such a Christian happens to see that they killed someone who constantly attacks them in dream, this is undoubtedly a sign of victory. It is likely that they've obtained victory and dominion over the strong man.

Understand that in most cases where someone confronts you in a dream, it isn't really a human but likely a demons, dark spirits and agents of darkness assigned to destroy you.
In most cases, dreaming of killing someone in sef-defence is a sign of victory in spiritual warfare. If you're able to kill your attacker in your dream, you need not worry about it, because if they too had the ability, they would terminate your life.
Whenever you wake up from such dreams, go ahead and thank God for the victory!

Dream Of Someone Trying To Kill Me

Very many people have reportedly seen dreams of someone trying to kill them with a gun or a knife. I'll like to let you understand that this is a very serious spiritual attack against the dreamer.
If you happen to see such a dream, know that there is an assignment from Hell against you. Their mission is not spiritual oppression but termination of life.
This dream is often an indication that the kingdom of darkness has risen in full force against the dreamer, to take them down through every possible means.
The moment a person sees this type of dream, know that it is time to sit up, get right with God and pray hard.

Final Words On Dreams About Killing Someone

As you can see, there are many sides to dreams of killing someone. These dreams aren't always negative because dreams are spiritual. You may have no idea if the one you were enabled to kill in your dream is a spirit that was sent to terminate your life.
At the same time, we must ensure that we keep our hearts pure; get rid of unforgiveness and avoid conflict with people as they could lead to loss of life. Our main enemies are not humans, but dark spirits who are rebellious against God (Ephesians 6:2).
God bless you.